“Alone”
A river clears enough to see the bottom
A canoe left across on it.
There’s no loneliness,
But the peacefulness of silence.

Who knows it's a formation of confuse?
Whose acquaintance across the side?
People loves to rush around confusion
Loves to anaesthetize themselves in the crowd.

But I’m acknowledging this poetic scenery.
even fond of the symbolic pureness of this loneliness.

Origins
Su Shi, the poet during the Northern Song Dynasty described Wang Wei, also a poet Scenes appears in poet and poets appears in paintings forming the Chinese ink paintings derived from the tribes of literati paintings. Either Chinese or Western paintings, Realms (Formations) or intention are expresses by artists through the sceneries and characters. Erdai Art Hall collects thousands of art works donated from Mr. He-Tong Zhao in which there are up to 120 works in the theme of “Boats”. We named this exposition on behalf of his poetry work “Alone”, hoping to outline his dependent through boats. 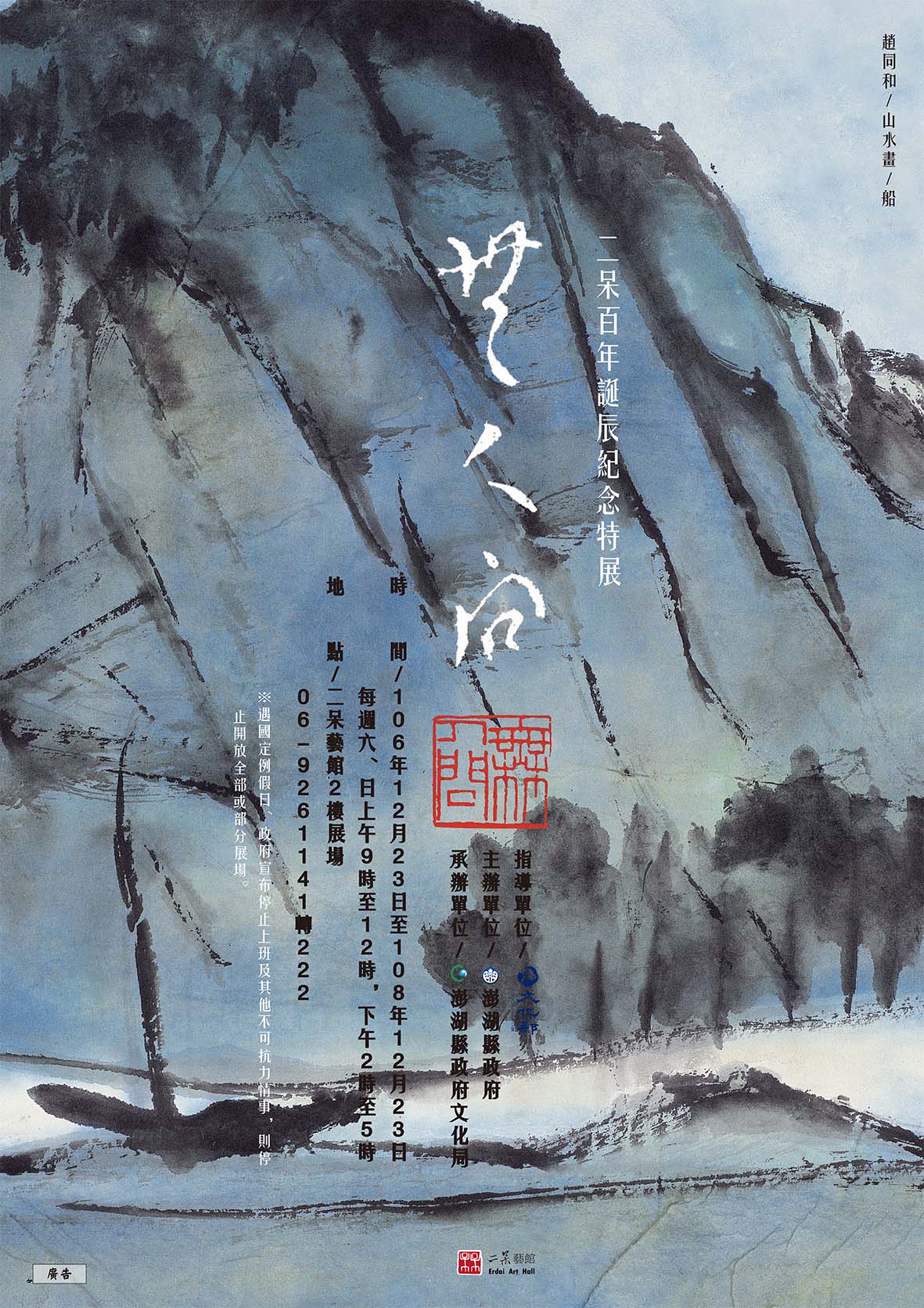 Exhibition theme information
When reading Erdai’s poem “Alone”, might as well understand the point of view through the examiner from the Academy of Classic poetry in the Song Dynasty. Deng Chun’s book “Paintings”: To match the questions attached, such as “No one crosses the wild waters but only a boat floating.”, Since after the second person, more than empty boat shore side, or between a heron with strong fist and some are behind the boat’s roofing, and its not only the one. Drew a boatman lying on the stern, cross a flute with no people around, seeing only the boatman clearly. This article represents the granted from the Shuan-He Art Academy in Song Dynasty of the “Climbing the White Stork Tower for the painting exam questions: Many people drew the empty boat alongside the shore, or drew the egret standing on the boat and the teal resting on top on the boat, while outstanding painters drew a boatman lying on the edge of the boat with a flute on the side showing not only himself on the boat but no passengers are on it, expressing the leisureliness of the boatman. The beginning of “Alone” indicated “A river clears enough to see the bottom, A canoe left across on it.
There’s no loneliness, But the peacefulness of silence.” sharing alongside with the winner from “Paintings”.
Second draft mentioning Who knows it's a formation of confuse? Whose acquaintance across the side? People loves to rush around confusion. Loves to anaesthetize themselves in the crowd. Meaning the ferry, Confusion meaning the ferry point, later on explaining when one is lost track of somewhere. Meng Haoran, poet during the Tang Dynasty “Seeing of Yuan-Tai Zu”:

The Jingzhou Dongwu mutual meet water for place.
You go spring river now wide.
Sunset travel sail where moor.
End of sky one look break person heart
Jingzhou and Dongwu are both on the water,
You travel down the river in spring, now the level is high.
A sail is underway at sunset, what place will it moor?
Looking to the end of the sky can break a man's heart. 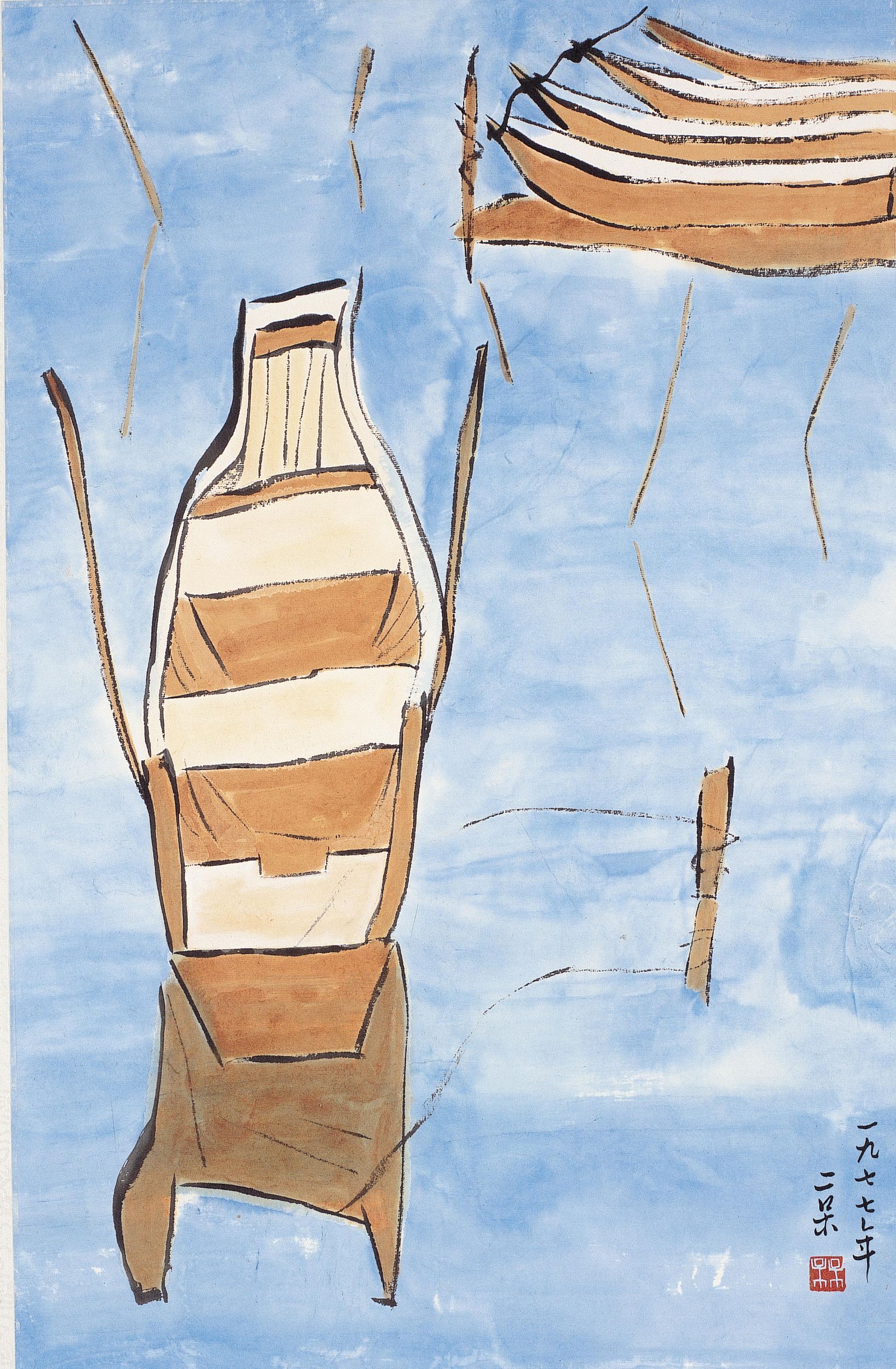 And Mei Yaochen, poet from the Song dynasty’s Canglang Pavilion: “When asking to buy the clear water in Canglang Pavilion, you become a resident. Setting on the Canglang Pavilion, you are acquainted to it, and as you get older you get to the side of the lake. “Where exactly is Canglang Pavilion? The Dongting Lake and the neighbors. The trees and bamboo are together, collaterals of fish and crab, white song Seng soup, cooked with purple aster. Yellow tangerine picked during fall nights, crops cooked to rice. Troubadour “Rusticate” poem, lazily drunken in a towel, concerns and suffers are all gone, who else is frequent. The Chu Yang book yesterday, words in there seem so true. Suppose you have just left your own country, I try not to maze, The Quartet is impossible, plenty of things there. Now you're happy, Is it not far from the dust, founded，friends aren’t in shanghai. Don't be with Wu Fengshang, the customs of the state of Wu, two strands of dragon spines, these people have not changed. Reading is originally a way, Do not consider low and poor, Must teach the countryside，will the arrival of etiquette. The “Confusion” in these two poems represents more with the peach blossoms and hermit related. “The opposite shore” is being exampled from the reedited version Chinese dictionary by The ministry of Education as to: (1) The other side of the sea shore (2) Buddhism explanation, the place and formation afterlife. “Selected．Wang Jin．Hillock head Temple inscription”: “people whom are on the other side of the shore, in here，much gratitude to the streams；pushing nothing to six degrees.” (3) Explaining to yearn for a certain realm (mind). Comparing to the words from Erdai “People loves to rush around confusion
Loves to anaesthetize themselves in the crowd!” The other side of the shore represents the realm of nirvana.To synthesis the two poem above，The last two paragraphs from “Alone” indicates : But I’m acknowledging this poetic scenery, even fond of the symbolic pureness of this loneliness. Mr. Erdai is explaining the easy and without anyone’s disturbance way of living, as likewise to the blossom fields.

Conclusion.
Northern Song Dynasty during Lunar calendar (1044), Su Shun Qin the poet sailed to Suzhou, spent forty thousand dollar to by the villa of the the five generations of Sun Chengyou, and built a yard besides the pond, From “The words of Chu” :When the water can wash my hat, Canglang cloudy wash my feet, naming Canglang Yard ,and wrote the “Canglang Pavilion”.After graduating from middle school, Erdai was suppose to enter the Suzhou Academy of Arts (Year 1938)，but his father strongly disagree and prohibited to paint. Suzhou Academy of Arts is located in Canglang Pavilion side.Suzhou is known for the water land in China, for living through his life “Boats” “Rivers” and “Lakes” are as family to him. In the poem “Alone”, Erdai described the specialties of peace and quietness of the Chinese ink wash paintings. However, if we look at his artistic creation, is there a hermitlike atmosphere? When he drew about boat, he simplified the scenery as if the poem brings out the peacefulness and living while likewise as the portraits of the Buddha. However, his topics and compositions are derived from his life experience and sometimes he created a new world. As a result, the theme of "Boat" is more diversified and rich, inspiring the imagination from viewers.